Logging the Temperature of Biomass Fuel

When organic materials like wood or animal waste are used as fuels they are called "biomass fuels". Although having the advantage of being renewable, they have lower energy densities compared to fossil fuels. If they are heated above 200 oC though, in a process known as torrefaction, they gain a higher energy content and are converted into a coal-like material. Similarly to coal though, self-heating then becomes a safety concern during storage and handling. There are several incidents of accidental fires that have occurred when self-heating lead to ignition.

Dr Tengku Nnoor Tg Azhar at Sheffield University has been modelling the self-heating behaviours of both torrefied and non-torrefied biomass. Part of her research involved experimental study of the behaviour of differing amounts of samples heated up to various oven temperatures - examining the time taken for a thermal runaway.

The research team measured temperatures using five type-K thermocouples. They collected data from the thermocouples with a Microlink 751 data logging system. The Microlink was connected to a laptop running Windmill data acquisition software which recorded temperatures every second. The data was transferred to Microsoft Excel for further analysis.

A stainless steel wire mesh basket held the biomass samples. The basket was suspended in an oven, and thermocouples positioned in the basket and the oven. The oven temperature was maintained at a constant temperature. 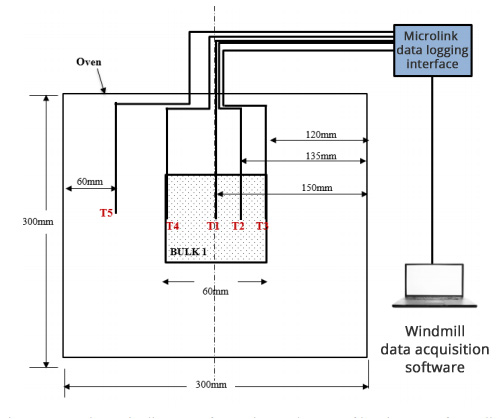 Schematic diagram of experimental setup. Bulk 1 is the wire mesh basket holding the biomass fuel. T1 to T5 are thermocouples.

After mathematically modelling the heat and mass transfer, Dr Azhar compared the simulated data with the experimental results. She found an agreement betweent the two, the experimental data collected by the Microlink 751 and Windmill software validating the numerical model.

The model could predict the development of hot spots in piles of fuel, and can be used to help identify the possible self-heating phenomena that lead to ignition.