Windmill has several programs which you can use to control your digital outputs, including DigitalOut, AnalogOut, Graphics and Test-Seq. Additionally, the Windmill IML Tools make it easy for you control outputs from your own applications.

This software lets you control any number of digital output channels. It provides push buttons for you to change the state of each channel. You can switch each channel individually, or switch several channels at once.

You can group several digital channels together, so they are all switched on or off at the same time. You group them using SetupIML and then control them using AnalogOut.

Each digital channel (or line) is initially set to on or off by a single bit. When you want to always switch several channels at the same time - for example to open or close 8 relays at the same instant - you group up to 8 channels together. All 8 relays will now be controlled by a single value rather than by 8 separate ON/OFF values. In binary the value would be from 00000000 to 11111111.

To do this you use the SetupIML software. Simply set alarm thresholds for each analogue input and link these to the digital output you want to switch. You can choose two thresholds for the each alarm, and select a different digital output to be triggered for each. This lets you, for example, automatically switch off a heater when a temperature rises above a certain point and then switch it back on if the temperature falls below another threshold.

Start SetupIML and double-click the analogue input channel which you want to monitor. Now select the Alarms button. You will be able to select your thresholds for switching the digital outputs.

Graphics lets you design and create your own display and control windows. You can insert buttons to control digital outputs. These can take any appearance you like. There are three types of button: one that toggles between on and off, one that always turns an output on and one that always turns an output off. You can also insert "LEDs" to light up when the output is on. Finally, you can choose whether the the digital output should initially be on or off. For more details see
https://www.windmill.co.uk/graphics.html 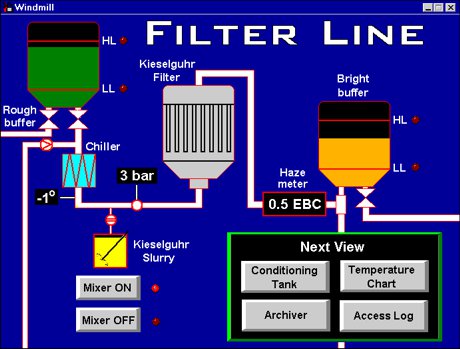 Test-Seq interprets a file of commands and controls equipment and applications accordingly. It can send commands and data to other Windows programs, or directly to the hardware inputs and outputs. The command, or test sequence file is a text file which you can easily create in a text editor or word processor. Use Test-Seq to control digital outputs depending on timing or environmental conditions. For more details see
https://www.windmillsoft.com/daqshop/test-control.html

You can use the IML Tools to switch digital outputs directly from Windows applications like Excel, from JavaScript code running on a web page, from Visual Basic programs or from any developer tool can integrate Active X controls. Windmill takes care of the communication with the hardware leaving you free to concentrate on your application. For more details see
https://www.windmillsoft.com/daqshop/programming-tools.html

All the Windmill programs mentioned can be used with equipment connected to the PC over Ethernet, USB, RS232, RS422, RS485 or Modbus. Contact Windmill Software at [email protected] for more information.